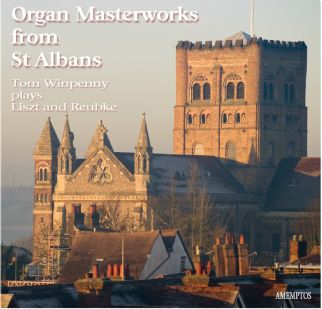 Our second organ CD, released during the 2013 St Albans Organ Festival on 11th July, contains two of the world's greatest organ works - Julius Reubke's mighty "Sonata on the 94th Psalm" and Franz Liszt's original (1855) version of his homage to J S Bach - the "Prelude and Fugue on B.A.C.H." In addition, there are four other short pieces by Liszt - three transcriptions of Bach's works and the gentle "Ave Maria von Arcadelt".

All the pieces show off the newly-restored St Albans organ in all its glory, and coupled with the brilliance of Tom Winpenny - one of the leading organists of his generation - are guaranteed to find favour with all who love organ music.

Indeed, Paul Hale, in "Organists' Review", is emphatic - "a 'must have' if ever there were one".